Zodiac Star Sign Hip Flasks here at The Pocket Hip Flask Company, yes that’s right we now offer a range of Zodiac Star Sign hip Flasks.  These stainless steel hip flasks come with each of the twelve signs of the zodiac.  You can have either red, black or plain metal finish, each flask is laser engraved to depict the start sign in great detail.


We currently offer 3 different variations of Zodiac star sign hip flask.  These include a red glossy paint, black glossy paint and a brushed stainless steel with black image.  Each of the 12 star signs have been laser engraved onto the front of the flask to create an eye catching hip flask.  Our zodiac hip flasks look great and make the idea gift for people who like a little drink while pondering what the future holds for them.

All our zodiac star sign hip flasks can be engraved on the back so you can personalise your new hip flask and make it special. 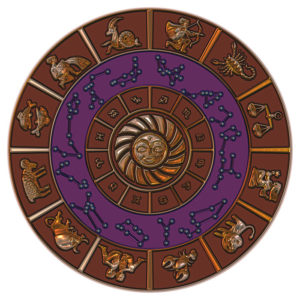 About the signs of the Zodiac
The Zodiac is an area of space which is centered above the ecliptic, it appears that the suns path crosses the celestial sphere during the course of a year.  In astrology the zodiac is often represented as a circle which is split into twelve sections, each 30° division represents that star sign, the sun is seen to move around this circle passing through the twelve star signs of the zodiac during the year.

The 12 divided constellations are what these days, we call the star signs or, signs of the zodiac. 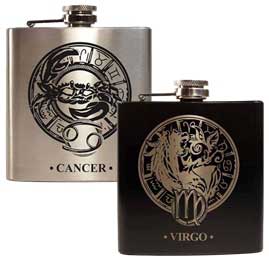 It is said that the zodiac is an ecliptic coordinates system. For those of you who are not sure what the ecliptic is , basically it is the circular path that the sun follows throughout the year. The orbit of the sun.

So, where does the term zodiac come from –  a few places actually.
Latin – Zodiacus which comes from the Greek term zodiakos Kyklos which means circle of animals.
This circle of animals is said to be the 12 constellations that represent the star signs. Loosely based of course as not all of the signs are animals…

What you see below  is a list of the twelve signs of the modern zodiac. These are the 12 signs that you will be familiar with and that most of us know. There are many languages used to depict the sign such as Latin, English , Greek, Sanskrit and Babylonian.  The Sanskrit and Babylonian terms are used for the constellations only and not the actual zodiac signs themselves. For these we use mostly Latin and English. Mostly Latin to be honest as they sound much nicer 🙂

Thanks to the guys over at Wikipedia.