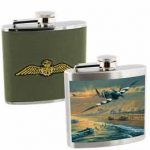 The designs and sale of all of these official RAF hip flasks have been approved by the RAF, hence the official part. Unofficial flasks are not supported and endorsed by the RAF.

Each of these wonderful plane inspired hip flasks comes presented in a lovely RAF gift box.
These hip flasks are super popular with all types of folk. If you have a passion for planes or know someone who does then these RAF Hip Flasks are just perfect.
These flasks also make very popular gifts for those who have flown with the RAF or similar as they inspire nostalgia in folk, especially the older generation.

We are sure you will love these flight inspired hip flasks. The collection that we have here is one of the best available and includes many favourites such as the Red Arrows, Spitfire, Lancaster and more. Personalise one of these hip flasks with one of our free engraving fonts.

All of our official RAF hip flasks are made from high quality stainless steel. We have blueprint designs, commemorative WWI collection paintings and some great canvas coated flasks, just to name but a few.

Each flask is a 5oz flask which can hold 142ml of that amber nectar that we like so much and all have a captive top which means no more lots tops! These flasks are kidney shaped flasks which means that they are made to fit the shape and curves of a body which makes them great for popping away in your pocket.