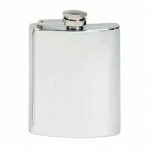 Captive top pewter hip flasks are the evolution from the traditional top hip flask. For the concerned drinker who is not sure whether they can be trusted to keep hold of their cap, these captive arm pewter flasks offer the safer option.

The caps of these beautiful pewter hip flasks are attached via an arm also known as a ‘captive top’. When you unscrew the cap the arm swings up and away from the flask taking the cap and enabling you to drink your favourite tipple without the threat of losing your top.

When looking to purchase hip flasks many people look to this simple but effective design as the threat of losing the top when a little tipsy drives them to make things easier. This is really a personal preference, naturally the biggest benefit of this style of hip flask is the cap remaining with the flask at all times, for some this makes the choice a simple one.

With the advent of adding the cap to the flask via the captive top new cheaper stainless steel hip flasks became popular but when it comes to both style and elegance the pewter hip flask will always win hands down against its cheaper steel brother.

Pewter hip flasks are the more affordable version of the expensive Silver hip flasks that started to make their way into upper class homes during the Victorian era. Silver hip flasks became very popular amongst the rich and where seen as a great way to show off their wealth. Pewter also known as the fourth precious metal produces a lovely shine akin to silver but at a much better price and so has become very popular.

The addition of the captive top has only further cemented the pewter hip flask into the today’s society as one of those must have items when seen out on the town. Pewter looks expensive, doesn’t make your drink taste of metal and is cost effective. With the added bonus of the captive top people no longer have to worry about losing the top off their favourite flask.

Our range of captive top pewter hip flasks is very extensive offering our customers a wide range in both style and size to fit every occasion.