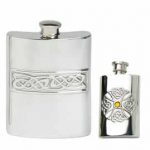 out. The artful modern and classic Celtic designs on a shiny pewter hip flask are something that can be treasured for many years to come.

Celtic designs can be traced back thousands of years and have been found throughout history where they were widely used in artwork such as jewellery, tattoos and home decoration.  Nowadays we also add these designs to clothing and of course hip flasks.

The simple yet effective Celtic designs use many different styles of knotwork, lettering, patterns, as well as human and animal forms (also known as zoomorphics) to form the final piece of art.

The modern form of Celtic art often still includes simple patterns like knots and line drawing as well images inspired by birds, dragons or snakes as well as spirals and crosses.

It is thought that in about the 18th Century we here in the British Isle started to revive this form of Art, giving our own twist to the original Celtic art that was thought to have originally emerged thousands of years ago throughout Europe with the help of the Celts.

Celtic art is often associated with pagans and hippies where it still has a big influence with people who like the mysterious yet simple patterns and artwork.

Our pewter Celtic hip flasks are a testament to the resurgence in the popularity of Celtic designs. Pewter and Celtic designs really go so very well together, you’ll see from the designs we have that the artwork jumps off the pewter hip flasks really making the images come to life.

The artwork on our Celtic pewter hip flasks are finished in several different ways; we have rolled designs, these Celtic patterns are rolled on to the hip flask using a roller which has the pattern attached, this creates a deep pattern which makes the artwork come to life out of the flask. We also have Celtic inserts, these are where a different coloured metal is inserted into the face of the pewter hip flask, this creates a two toned effect.

Our Celtic pewter hip flasks come with and without the captive top option so you have the option to go with either the traditional look hip flask which we think goes well with the Celtic designs or you can take a more modern approach and go with the captive arm which safe guards your cap from being lost.