Shooting Hip Flasks at The Pocket Hip Flask Company UK, we sell some wonderful shooting hip flasks. These shooting flasks are inspired by the great sport that many people enjoy safely throughout the world. Competitors from the UK managed to claim many medals for shooting during the 2014 common wealth games so this sport has a strong following here in the UK. 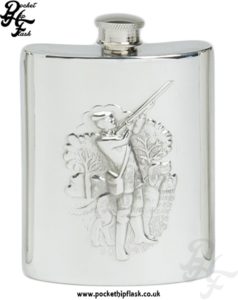 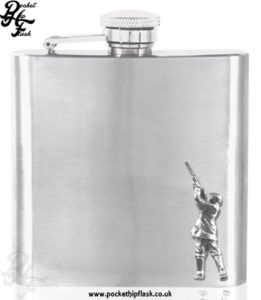 If you were looking for something a little different then we offer a couple of pewter shooting hip flasks that do not conform to the normal hip flask shape.  These include a shotgun cartridge shaped hip flask with a brass top, this is also available in a cheaper stainless steel version.   We have also found a rather interesting round clay pigeon shooting hip flask. This flask has a brass round engraving plate on the front and has concentric circles making up a beautiful shooting hip flask. Of course this hip flask has a plain back so a nice engraving message can be arranged for the back.

All of our hip flasks come with the option of engraving. Of course you can also add a presentation box and we have a selection of funnels to choose from.