Scottish Hip Flasks at The Pocket Hip Flask Company, we sell a nice selection of Scottish Hip Flasks that are perfect for the patriotic Scot or the someone who just loves the beautiful country and interesting people.  Scotland is a lovely place with many wonderful places to visit that are heavily steeped in this ancient lands history.  Our best selling Scottish hip flasks include the lovely pewter thistle and Scottish Lion hip flasks.

The people of Scotland are fun loving, proud and patriotic people.  Our range of Scottish inspired hip flasks help show case the patriotic symbols often associated with Scotland like the Scottish thistle, Scottish Flag, the famous Scottish pipers and The Scottish Lion.  Using both pewter and stainless steel to produce these flasks means we can offer a great selection to our friends north of the border. 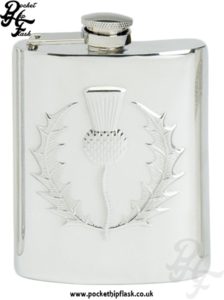 Scotland, or more commonly the Lion Rampant of Scotland.  Used historically by the King of Scots, the banner differs from Scotland’s national flag, the Saltire.

The Saltire: The Flag of Scotland, also known as Saint Andrew’s Cross or the Saltire, is the national flag of Scotland. As the national flag, the Saltire, rather than the Royal Standard of Scotland, is the correct flag for all individuals and corporate bodies to fly in order to demonstrate both their loyalty and Scottish nationality.  Excluding certain expectations and where ever possible is it flown from Scottish Government buildings seven days a week from 8am until sundown. 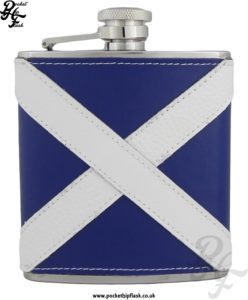 We sell both pewter and stainless steel Scottish hip flasks at The Pocket Hip Flask Company as we appreciate that our customers like to have a wide choice of quality hip flask to choose from.
As Scotland is also part of the United Kingdom we have included our Union Jack hip flasks in the Scottish selection.