Scampton. The Red Arrows team were first formed 1964 and were comprised solely of RAF pilots, this replaced a number of unofficial aerobatic teams that had originally been sponsored by RAF commands.The trademark diamond nine formation is used as the Red Arrows badge with the nine planes shown in this formation, with the motto Éclat, a French word meaning “brilliance” or “excellence”.

We offer a couple of pictured Red Arrow hip flasks to celebrate the wonder that this great display team hold throughout the world.
I have seen the Red Arrows about 15 times throughout my life as I lived very close to the Farnborough air-show in Hampshire.  The Red Arrows always put on a great show and continue to prove that the RAF is the best air force on the world.

We also sell some great Spitfire and Lancaster hip flasks.

Probably one of the most iconic British aircraft is the Supermarine Spitfire, this British single-seat fighter aircraft is very iconic and was used by the Royal Air Force and many other Allied countries during and after the Second World War. The spitfire was used very heavily during the war and was the only British fighter plane to be in production continuously throughout the war. The spitfire was produced on mass and n greater numbers than any other British aircraft.  The popularity of the Spitfire has never dwindled and it as it still remains very popular today with approximately 55 Spitfires (at time of writing) being airworthy, many more of these fantastic planes can be found at exhibitions and museums throughout the world.

The Avro Lancaster is an iconic British four-engined Second World War plane that was used for heavy bombing, the Lancaster was 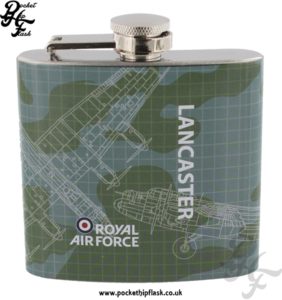 designed and built by Avro for the Royal Air Force (RAF). The Lancaster became the main heavy bomber used by the RAF during the Second World War, the aircraft first came into active service in 1942 where RAF Bomber Command were given charge of these fearsome machines, the RCAF, and squadrons from other Commonwealth as well as European countries serving within the RAF also saw the Lanc bolster their ranks .  The Lancaster was at the heart of the strategic bombing offensive which was aimed at European targets and during many night runs help to stop the enemy from gaining a further foothold. The Lancaster is by far the most famous and successful of the WWII bombers.  Many people owe their lives to the brave pilots who flew them.

Our fantastic range of RAF hip flasks really show the splendor of these magnificent flying machines and the brave men and women who fly them.