The hip flask began to appear in about the 18th century in its modern form. 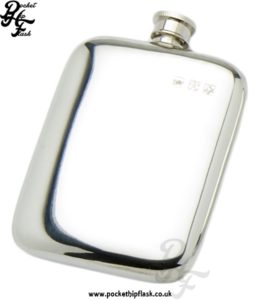 During the flasks first major outing it was initially used by both men and women of the gentry.
Several centuries before the hip flask appeared as the flask that we have come to know and love a larger and less compact design was used, however the size was too big to fit in a jacket pocket or a ladies purse and a smaller variation was produced to fit in with the new trend of carry ones liquor out to a show.

It is noted that during the Middle Ages gutted or scraped out fruit was used to store liquor, you could say this was a form of hip flask.
Pig’s bladders were even used during the 18th century and hidden inside ladies petticoats when they were visiting docked British warships, this was so they could smuggle gin on board which was the popular tipple of choice at the time.  The sale of hip flasks was prohibited in the state of Indiana when prohibition was introduced in the 1920s so other forms of flask were sort after.

When hip flasks first arrived on the scene they were traditionally made of pewter as well as silver,  glass was even used in a combination of glass and metal or on its own, nowadays most modern hip flasks are made from stainless steel.

We have a great range of both pewter and stainless steel flasks, you can find them encased in luxury leather of showcased on their own.