Looking for a Hip Flask in Nottingham? We offer a great range of hip flasks that can be engraved and dispatched the same day if ordered before 14:00pm.  With next day delivery you can have your new pewter or stainless steel hip flask delivered to your door as fast as a speeding arrow and in plenty of time for whatever occasion beckons. 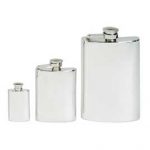 So if you find yourself living in or close to this wonderful historical city and are in need of a last minute gift then we have a great range of hip flasks that are in stock and ready to engrave, all from our online store.  From English pewter hip flask to stainless and luxury leather we have a superb range of engravable flasks to suit all occasions.  With same day dispatch and engraving on orders placed before 14:00pm and next day delivery options you are sure to get your new flask in time for your event.

Hip flasks really do make the perfect gift, they are usable, look great and can be personalised creating a really meaningful gift.  Whether the person uses their flask or keeps it as a reminder of the some time in their it will always bring a smile to the face of the recipient.

Nottingham city can be found in the county of Nottinghamshire, England in the East Midlands.  Its a fair bet you’ve heard of the place due to the stories relating to the legend of Robin Hood.   Dating back as far as medieval times Robin and his band of merry men would said to have ‘robbed from the rich to give to the poor’.  Of course whether this person really existed can be heavily debated, the one thing that is very clear is that the stories have help put Nottingham on the map as it a busy tourist destination.

Predating Anglo Saxon times the city of Nottingham has a long and interesting history that include people like Richard the Lion heart and Prince John. Originally known as the ‘City or caves’ Nottingham was also known for a time as ‘Snotingham’ due to ta Saxon chieftain who took up rule there, a rather interesting fellow called Snot.

is where the final show down between Robin Hood and the evil sheriff of Nottingham is said to have taken place, the castle still stands today and is a popular tourist hot spot.

With two universities Nottingham is a busy student city that is popular with the younger generation.