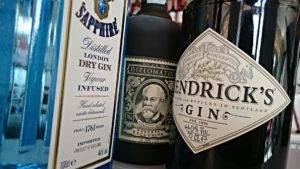 You have heard of the term Dutch courage right?? Well, you have gin to thank for that…..it is claimed that English soldiers drank it to calm their nerves when offering support against the Spanish in Antwerp. Although back then, it was a slightly different variation called Jenever which just so happen to be Dutch for Gin.

I have to admit that I never used to be a fan of gin however, a friend donated a bottle after she had a little too much of it one evening and so on a different weekend I thought that I would give it another try. This time though, without the tonic as I think that may have been what I didn’t like. We had no mixers in the house except cranberry juice and so I thought why not… wow! The bottle is gone now – I think Simon may have drunk it 😉

Etymology
Gin is derived from the work Genever. It seems that us English are just far too lazy to use the full work and so shorted it to Gin instead. The original word is Jenever which is Dutch.

Origins
Holland in the early 17th century is the first date and country confirmed for the beginning of the production of gin.
Historians are not 100% who invented gin however there is a chemist in Holland how is often falsely claimed as its inventor purely because gin was often used and sold as a medicine used to treat a whole host of illnesses. Originally though, the taste was not good and so experimentation began to try and make it taste a little nicer. This is where they started adding fruits such as Juniper berries to try and mask the natural taste. Well, what do you know, it worked and now juniper is what flavours all gins. There are so many different variations and flavours that you can get these days but the one constant across all is Juniper..

Thanks to heavy duties that the English government imposed on imported spirits and the lax laws that allowed unlicensed gin distilling and production, gin became a very very popular drink for the poor. Gin shops were popping up everywhere in England between 16-95 & 1735. These times were known as the Gin Days or the Gin Craze.. Because, compared to other drinks, the cost for gin was very low, it became the drink for the poor and often instead of juniper was flavoured with turpentine. Eugh! Can you image what this would have been doing to their insides…. There were increased death rates as it was being drunk so often and also caused a multitude of social problems. The population of London stopped expanding for some time because of it. Serious stuff!
William Hogarth depicted Gin Lane in a painting and it has great effect.

Because of the problems that gin caused, the Gin Act was introduced in 1736 to try and combat some of the issues. The gin act imposed high taxes on gin however, instead of the result that the government were hoping for it caused what was came to be known as the gin riots. The act was eventually abolished in 1742 to be replaced with its more successful predecessor The Gin Act 14751 as it forced the distillers into only trading with licensed retailers. They also bought up some of the Gin Shops to try and regulate the drinking hours.

Rum has evolved over the years into the delicious spirit that is a favourite of many today. It has gone from being associated as a poor person’s drink to a drink well enjoyed by all.
Pop some in your hip flask and happy days!

We have some other articles that we have written on Gin that you may also be interested in;
Gin – Production Methods and Definitions