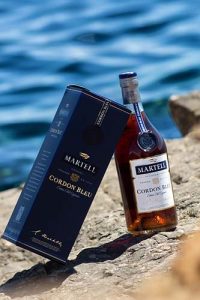 In all honesty, for me, Brandy was always an afterthought and never have I preferred to have a brandy over other drinks until…. until a wonderful mini break with my mother-in-law visiting some German Christmas Markets. Gosh this was a few years ago now.. We were in a little town called Rüdesheim which is just stunning, it was a cold winter day and we stopped off in a little cafe for a warm drink and this is where I became hooked. We had what was called a Rüdesheimer Kaffee. Wow delicious!

A Rüdesheimer Kaffee is wonderfully warming drink. Asbach Brandy (made in Rüdesheim) and sugar cubes are added to an Irish coffee mug and are then flambéed to dissolve the sugar. Hot coffee is then added and topped off with whipped cream and chocolate flakes. Needless to say that I came home with some Asbach brandy and often make a Rüdesheimer Kaffee just because I can…

Enough about how I came to like Brandy, more about Brandy itself! 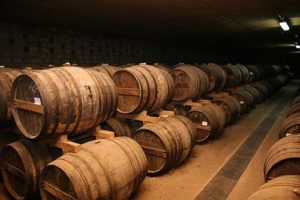 The wine was originally distilled as a method of preservation when transporting over any distance. However Brandy was born. The water that was removed during the distillation process was originally meant to be added back to the brandy before consumption however, it was discovered that after being stored in wooden casks with little water the result was so much better than the original spirit. In addition to removing water, the distillation process also added numerous aromatic compounds that gives brandy its distinctive nose.

The colour of brandy can occur naturally or can be added. If the brandies are aged in wooden casks the beautiful golden colour is created naturally. If they are not aged in wooden barrels then the colour is added by using a caramel colouring. Some are even done by a mix of cask ageing and adding colour.  They all look very similar so it is hard to tell the difference.

Brandy is generally anywhere between 35 % 60% ABV. Back in the day there were several methods of testing the purity of the brandy. They sound much more fun than traditional methods I have to admit.
One method was taking an amount of brandy and igniting it. If when the fire naturally extinguished itself, the entire contents were consumed by the fire without leaving and residue behind then the purity was considered good and ready.
Another method is similar to the first although a much better test. A portion of brandy is used and a small amount of gunpowder is added to the bottom. It was then set alight. If the gunpowder could ignite after the liqueur was consumed by the fire then it was again considered good and pure.

The serving of Brandy

Traditionally served as an after dinner digestif and is served at room temperature. The glass is then warmed by cupping your hands around it to warm gently. The warming releases scrummy aromas. You can warm the glass before pouring if you prefer. Overheating however can make the aromas a little too strong so just a gentle warming will suffice.

It can be drunk neat, in coffee (oh yes!) and in cocktails.

If you haven’t really tried brandy or think it is not for you then I urge you to try again, with a decent brandy and give it a chance. It really is a beautiful drink.
Brandy is the perfect drink for popping in your hip flask for those cold days.