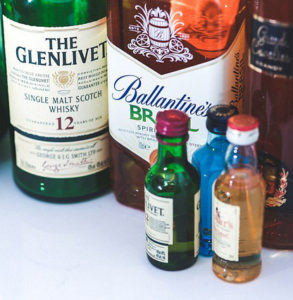 For some, whiskey is the marmite of the alcohol world. Either you love it or you hate it. I don’t think that I have ever heard anyone sate that whiskey is ok. It’s either ooh I love it or, no can’t stand it.
Here at The Pocket Hip Flask Company we of course love it!

Whiskey is a distilled liquor that is made from grain mash that is fermented. Various different grains are used for the various different varieties and classes. The common grains are usually wheat, rye, barley and corn. The grains may be malted which makes for another type of whiskey.

To get its wonderful flavour, whiskey has to be aged and for the best effect, it is aged in charred white oak casks or barrels.

Whiskey and its different types are very strictly regulated due to the many different variations that you can get. The class of whiskey that you have depends on many factors such as the grains that are used and the way that they are fermented through to the way that they are distilled and how long they are aged for. Complicated stuff although I guess if it was easy we would all be doing it . On hindsight  I really doubt that we would as it takes so long that I don’t think there are too many of us that would be so patient as to happily wait.

Etymology
The word whiskey is taken modification based on the Gaelic word for water which is uisce. In Latin distilled alcohol was referred to as Water of Life or aqua vitae. This was then translated to Gaelic  and so became uisce beatha. Early forms of the word in English were not overly successful and date back to 1581 or so.

Finally it would seem the word whiskey was born however, there seem to be 2 different ways to spell it. Whiskey or whisky.  Some state that the difference means nothing and that it is down to personal preference or perhaps regional languages  and so either or spelling is absolutely fine. Others say that the difference should depend on the origin or the style of whiskey.
Not everyone seems to agree and is seems to be an even mix across the globe and so, spell it either way and we will all know what you mean. 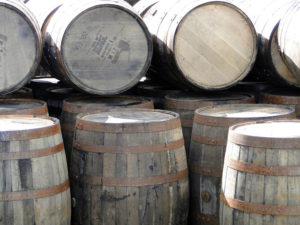 History
The European practice of distilling aqua vitae became a very common thing no later than the 15th century. The exact dates are not known. The wonderful art of distillation of brewing aqua vitae for “medicinal” purposes became very popular in Scotland and Ireland.
1405 was the earliest mention of whisky in Ireland when it was said that is caused the death of a chieftain due to drinking too much at Christmas.
In Scotland the earliest date is 1949 where knowledge is that an order was put through to Friar John Cor, by request of the king for malt to make aqua vitae. Turns out the malt ordered was enough to make around about 500 bottles.  Just a few then!

I wonder if they used to carry it around in a hip flask like we do?? Although, we do like to call them our whiskey flasks.

Originally when the distillation process was in its infancy, the whiskey was not left to age and so tasted pretty foul.  Compared to the lovely smooth whiskey we get today, back then it was pretty brutal and raw.  It used to be very potent too, more so than what we have now.

Whiskey used to be made pretty much anywhere  – old monasteries, people’s homes and even farms that was until 1608 when Old Bushmills Distillery opened up in Northern Ireland. With the very first license to distil they are now the world oldest distillery and are still going strong.

England and Scotland were merged in 1707 due to the Acts of Union and after this date taxes on spirits rose dramatically.
1725 saw many of Scotland’s distillers shut down or forced underground.  This was thanks to the English Malt Tax which drove taxes so high that most could not afford them. Essentially this caused a rebellion of sorts as to avoid the tax men, whiskey was hidden here, there and everywhere from under alters, tucked away inside coffins and any available space that could be found.  This is another reason that moonshine was born. Illegal stills operating in the dead of night under the light of the moon.
There was one point where at least half of Scotland’s whiskey sales were illegal.

In 1823 the Excise Act was passed which for a fee, brought about the legalisation of distilling for many others. Thanks to this act, the large production of moonshine came to an end.

Scotland and Ireland are of course not the only makers and distillers of whiskey it is made in many other countries.

George Washington opened a distillery in the US and during the revolution, whiskey was often used as currency. It was so highly coveted and was being made in so many different places that an additional tax was added in 1971 making it very expensive to make and distribute. This in turn cased the great Whiskey Rebellion and an awful lot of moonshine or white whiskey.

Scotch whiskey was even introduced to India in 19th century and it was very well received. SO much so that India’s first distillery was built in  Kasauli.

Whiskey has made its way around the globe over the years and will no doubt continue to be one of the favourite liquors of the word! 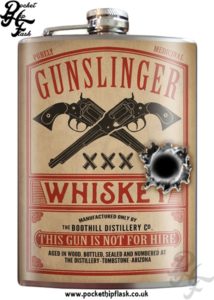