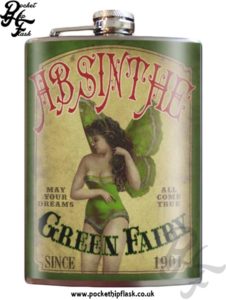 Absinthe is a deliciously tasty spirit which is most certainly an acquired taste. Like Marmite, you either love it or you hate it. Personally I love it! It has such a unique flavour that it truly is delicious. It probably helps that it is made from some of my favourite herbs. As many of you may know, Absinthe is a very strong alcoholic drink, usually around 40-75% proof.  Not one of the most popular drinking here in the UK, although the love is growing, Absinthe is incredibly popular around Europe. Yummy!

Absinthe in its natural form is green in colour however, it can be clear in colour. Many people mistakenly call the drink a liqueur, however as it is not actually bottled with additional sugars, it is actually a spirit. The added herbss are what gives it is’s sweet taste. Some of the herbs used are; wormwood, sweet fennel, anise amongst many other botanical herbs. The ones that I have just listed are the ones that you can taste the most. In the past, Absinthe was seen as a very dangerous and highly addictive spirit due to its hallucinogenic properties thank to the levels of Thujone that were found in the spirit. Thujone is a chemical compound present in the plant Artemisia Absinthium. The most common name for Artemisia Absinthium is grand wormwood which I am sure you have all heard of.

The origins of Absinthe

Although the medicinal use of Wormwood seems to date back to Ancient Egypt c.1550 BC., the first clear evidence of Absinthe as an alcoholic beverage dates back to Switzerland in the late 18th Century. Originating in the Canton of Nauchatel, a French speaking area of Western Switzerland, it became a very popular drink. Popular legend says that it started off under the guise of an all purpose remedy created by Dr. Pierre Ordinaire who was a French doctor living in Couvet. Said to have originated in 1792 however the date varies slightly depending on account. The recipe was passed from Pierre Ordinaire to the Henriod sisters also of Couvet.

The formula was then acquired by Major Dubied. With the help of his son Marcellin and his son-in-law Henry-Loius Pernod, the first Absinthe distillery was opened in 1797. In 1805 a second distillery opened up in France under the name Maison Pernod Fils.

Popularity of the drink soared i the late 19th and early 20th century France. It was the Parisian writers, poets and artists who made the drink so popular. Here are some names that you may well know. Ernest Hemmingway, Pablo Picasso, Oscar Wilde, Marcel Proust, Vincent van Gogh and Edgar Allen Poe – just to name a few.

The custom of drinking Absinthe became so common and everyday in the cafe’s and bars in both France and Switzerland that by 1860’s 5pm became known as “The Green Hour”.
By 1880’s the mass production of the Green Fairy caused the price to drop dramatically causing it to become the drink of all classes. From the bourgeois to the working class. France in particular drank lots – by 1910 the annual consumption was up to 36 million litres. Wow!

Because it was becoming one of the most widely consumed drinks, Absinthe fast became known as a troublesome drink. Spurred on by the wine makers and those against the drink, it was seen as associated with violent crimes and disruption.  There were reports that it had killed thousands of people due to it’s hallucinogenic effects and so after a petition signed by thousands the bans stated to happen. France, Switzerland, Belgium, Brazil, Netherlands, just to name a few.

Absinthe was never banned in many places and the reason for this was that it was just not popular. Take the UK for example, it was never banned as there was not many people drinking it. Absinthe began to reappear in the 1990’s when countries where it has originally been made realised that there was no ban in the UK and so brought the production here for a while. This saw popularity increase once again and countries in Europe started to contest the ban. I believe that all of the bans have been lifted now and that Absinthe is being produced around the globe again.

If you haven’t tried Absinthe the you really should. There is a certain way in which to prepare Absinthe so I suggest that you look it up and then have a go. It is delicious!

If you enjoyed reading this, why not take a look at some of our other Absinthe relating articles by clicking below;

Absinthe Cocktails – 5 of the Best